Lucas Cullen understands the need to talk, and also to listen. He does that on his weekly podcast.

But more importantly, he understands the need to act.

For those reasons, and many more, Lucas Cullen is supporting the Canadian Mental Health Association (CMHA) Kelowna branch.

Cullen recently brought his cheque to the CMHA Kelowna office, then had his photo taken with a much larger version. His smile indicates what his heart is feeling.

“It’s a very surreal feeling, and anytime you get to give back, you do because you know it’s going to a good place, and it’s for something that obviously bigger than all of us,” said Cullen. “I know I wouldn’t be where I am today without the help of professionals. That’s what’s most important, and anytime I can give back I want to. I know that will be till the day I die. I owe it to that.”

Today Cullen is supporting CMHA Kelowna with his donation of $1,400, but it’s a culmination of what he started more than a year ago when he launched his website www.strugglecreatesstrength.com.

Over the course of the past year, Cullen discovered that while he started out to help himself,  he could help many others who were struggling as well.

“The reason I started this is that I felt I was in a rut myself, and I wanted to basically showcase that we all have these ups and downs, we all have our stories, and I really just wanted to give other people hope through seeing other people’s stories,” explained Cullen. “Through seeing those struggles, through seeing that it’s real people that are struggling, we can actually learn that we can actually relate to all of these people. These relatable stories actually give us an opportunity to speak what we’re feeling, what we’re experiencing and what struggles we’re actually encountering.” 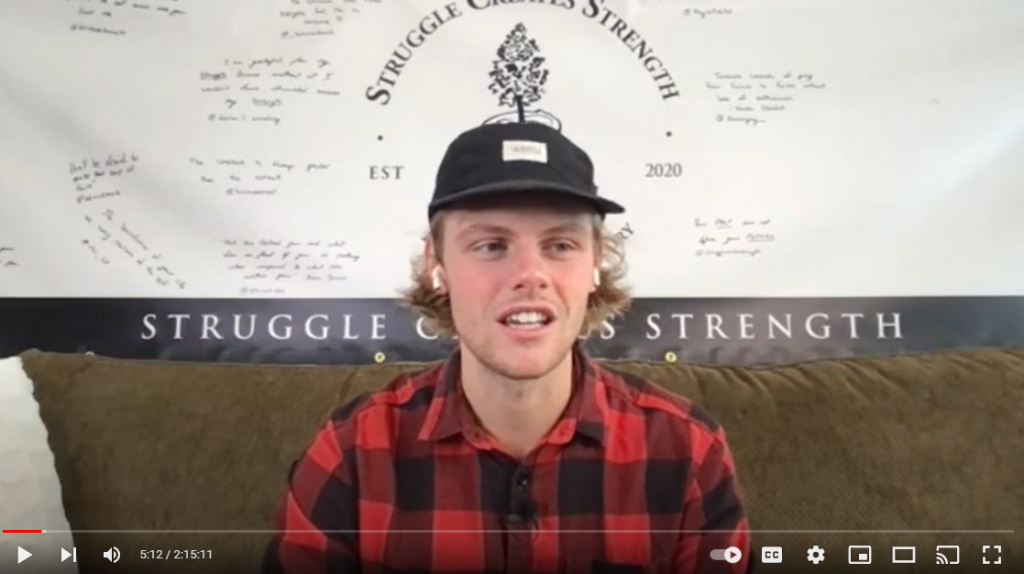 Cullen hosts the weekly Struggle Creates Strength Podcasts. You can find all the episodes, including his most-recent conversation with Morgan Skinner, who excelled at hockey until a series of concussions took her out of the game, here. He’s also spoken with Josh McLaughlin, another hockey player, and with Tyler Smith, a member of the Humboldt Broncos who survived the bus crash which took the lives of his teammates, coaches and friends.

“Through listening to these stories, I wanted to take a leap of my own, which was pushing myself, because I had obviously taken myself from severe struggle and pain and a lot of depression, and all forms of different mental health struggles, and actually translated that into something positive,” said Cullen. “I wanted to do something of even greater impact, which I saw as exemplifying that through running.

“So I embarked on a couple of crazy journeys.” 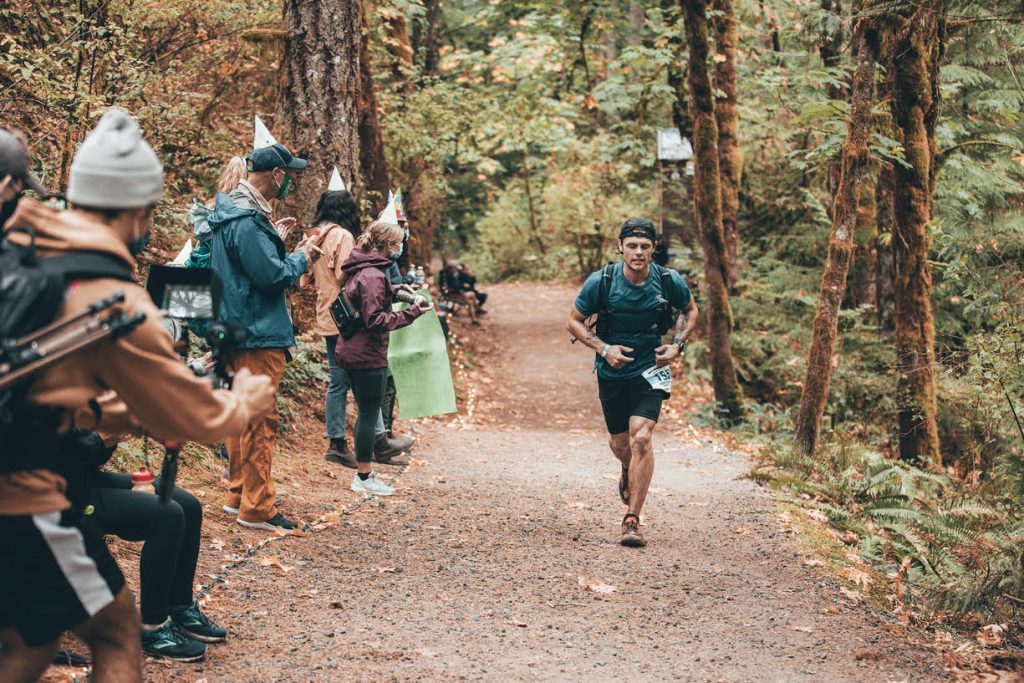 November, or Movember, is known as Canadian Men’s Health Month.

Ironically, this year’s theme is Move For Your Mental Health.

Lucas Cullen certainly took that theme to heart this past summer with a series of runs which tested his mental fortitude.

He took part in a 52.5 kilometer run through the mountains in Victoria.

He then travelled to Ontario and ran from Guelph to Goderich. That event, wait for it… 121-km.

He finished his trek with a 40-km run in Kelowna.

“Every single run was, obviously, it was a lot of physical pain. But every single time it did get tough, I kept thinking about the cause of it, and even my own struggles relating back to the cause,” said Cullen. “But I was also thinking about the people who were struggling, and who’ve been through a lot, or are going through a lot. I’m there just showing, even if you were once encountering these mental struggles, where it’s a struggle to get out of bed, eventually at some point I believe you can bring yourself to a point where you’re kind of inducing pain on yourself because you want to challenge yourself for positive reasons – instead of the strain and struggle we can’t necessary control.” 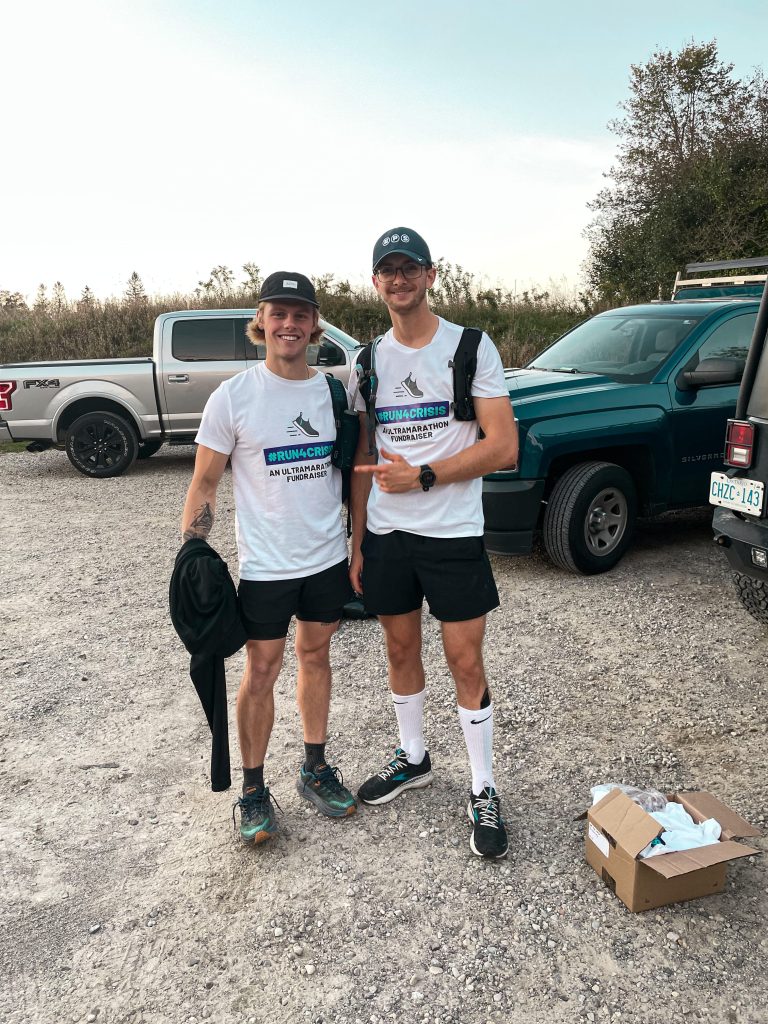 Cullen started a Gofundme.org page when he started his series of runs.

“It wasn’t even necessarily about the money. It was about creating conversation,” added Cullen. When you set out on these fundraisers, even though people may not donate, they’re going to talk about it.

“It’s always a bonus to be able to create something and create conversation in the meantime.”

Well, the support for Lucas Cullen’s runs did pour in.

Wendy Wright, CMHA Kelowna’s Fund Development Manager, was there to receive the donation.

“I think first of all, he’s to be commended for giving a very brave and bold voice to a movement. He’s helping many who are struggling by being an ambassador in the community and saying, ‘Look at what I’ve gone through, look at what I’ve achieved, and look at what’s next’,” said Wright. “By supporting CMHA Kelowna, Lucas is highlighting and showcasing what we are doing, which, in a nutshell, is mental health for all. How do we get that? Well, we get to that through our housing and homelessness services, our Foundry Kelowna mental health services for youth and families, and our Discovery College programs. There’s a lot we do and we want people to know and understand that there’s access out there if you are hurting, if you are struggling.”

And, we thank you! 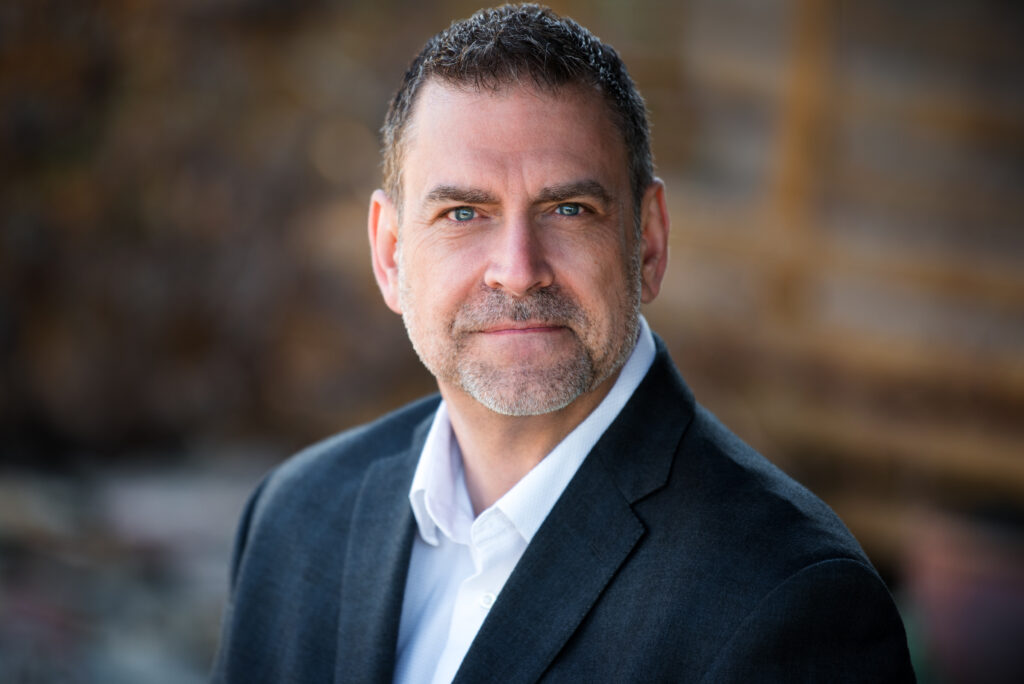 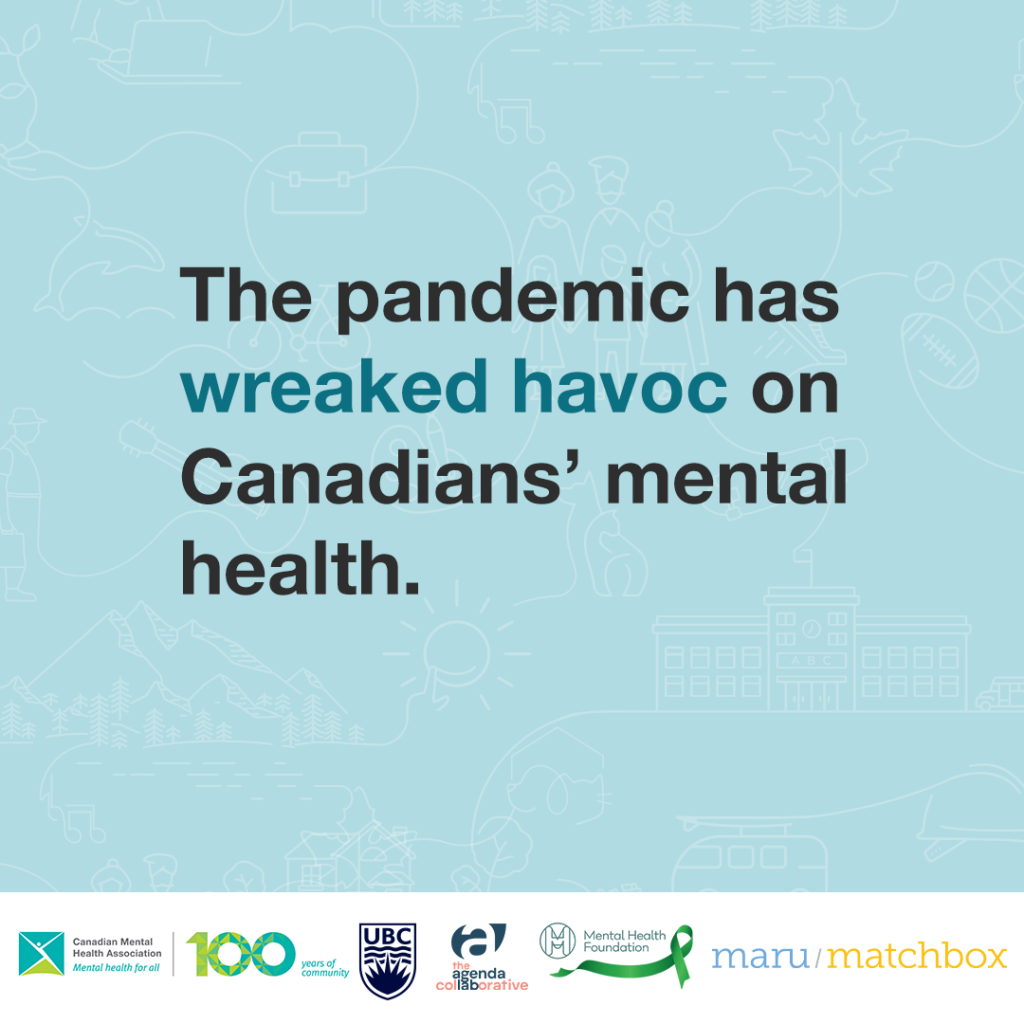 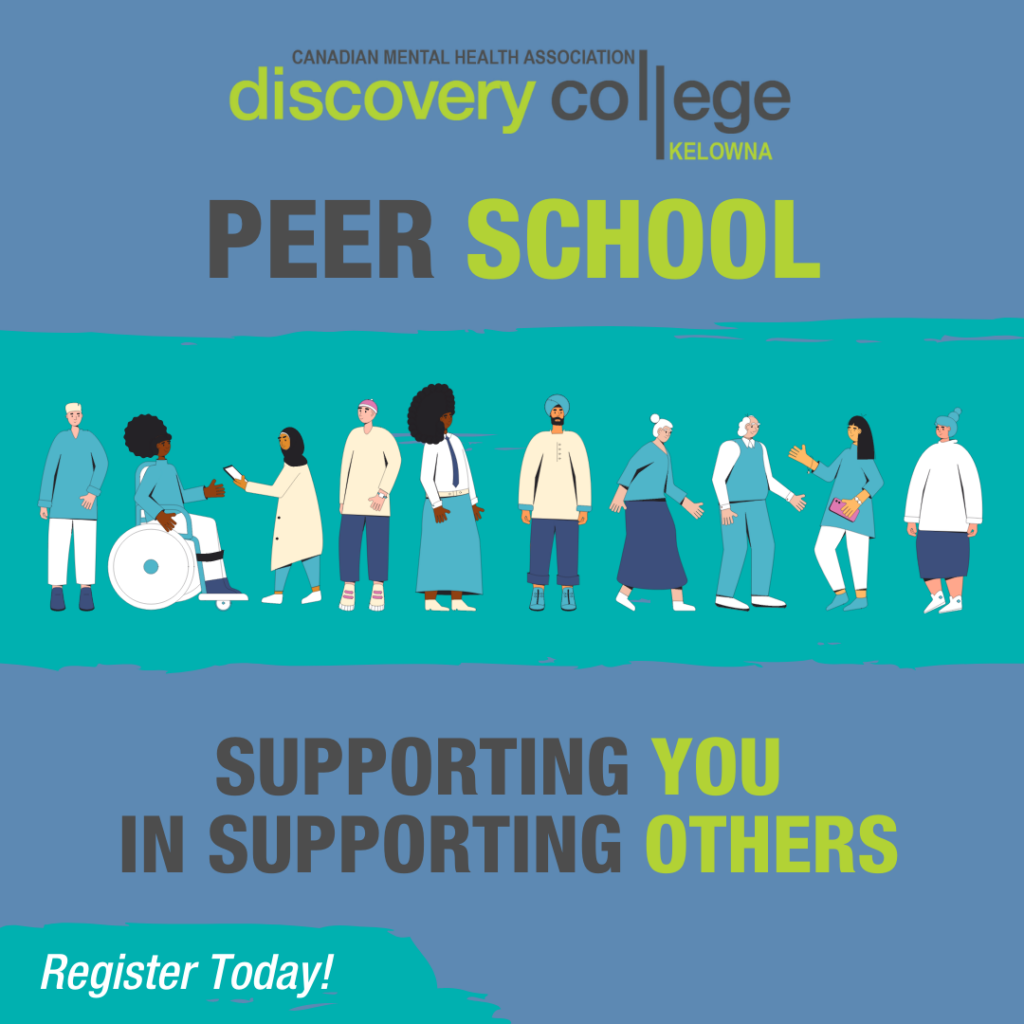 CMHA Kelowna is pleased to receive an $18,000 grant from the Bell Let’s Talk Community Fund to support the development of Peer School, a free online program for people to learn how to help and support others. Provided through CMHA Kelowna’s Discovery College online platform, Peer School is a range of workshops created to increase […]