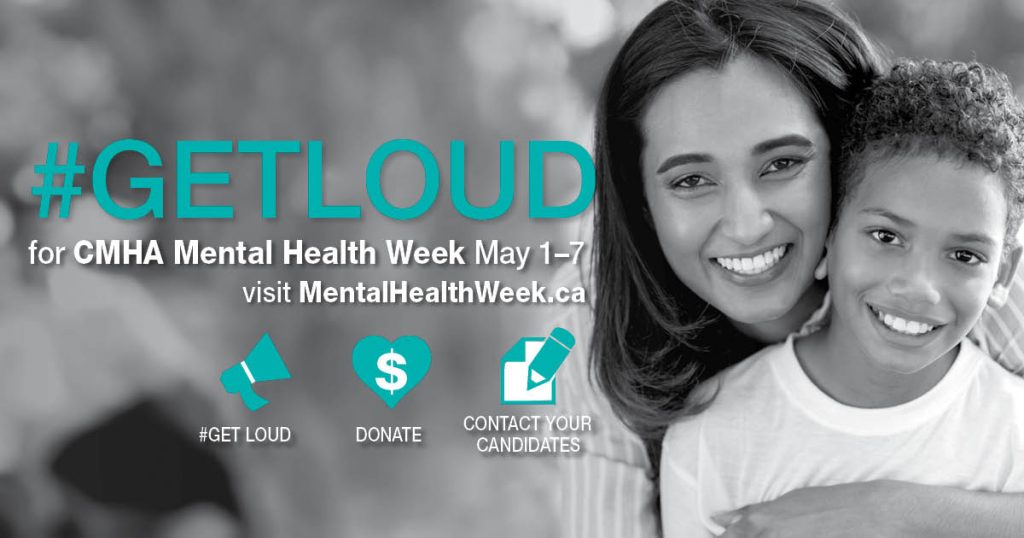 During CMHA Mental Health Week, Canadians take time to reflect on their mental health. But we do more than just reflect. We get loud about it. Join our Mayor and our Prime Minister in getting loud for mental health!
1. GET LOUD BY SPEAKING UP!
We often suffer silently. One of the ways to #GETLOUD is to speak up. Talk openly to someone you feel safe with: a loved one or a friend. If they’re informed and supportive, they won’t judge or shame you about your mental health concerns. Also consider talking to your family doctor. Tell them if you need support. Click around CMHA Kelowna’s website to learn about the programs and services we offer. If you’re in crisis, don’t wait. Go to your hospital emergency department or call 911. If you’re concerned about a friend, we have workshops like safeTALK (a suicide alertness training) to help you feel more prepared to help a loved one.

2. GET LOUD FOR A HEALTHIER WORKPLACE
You can promote mental health where you work. One way to start is to book a CMHA Kelowna presentation that provides education and addresses mental health in the workplace. Our experienced facilitators offer a wide range of presentations and we can even build the perfect package for your workplace. Click here to learn more about what we can offer workplaces and subscribe to our Workplace E-Newsletter. END_OF_DOCUMENT_TOKEN_TO_BE_REPLACED

On April 4 Ono will share his story of resilience at the annual Healthy Minds | Healthy Campuses Summit event, a post-secondary initiative of the Canadian Mental Health Association BC Division (CMHA BC). END_OF_DOCUMENT_TOKEN_TO_BE_REPLACED

From 6:00-9:00am on January 25, tune in to AM 1150 to hear our own Candace Giesbrecht co-host with Phil Johnson to talk about mental health! You can even listen online from the comfort of your home or office at http://www.iheartradio.ca/am-1150

In addition to texts and phone calls, Bell has extended their donations to include actions you can take on Twitter, Facebook, Instagram, and Snapchat! For all the ways you can raise money for mental health initiatives, click here. When you tweet, make sure to use #BellLetsTalk and tag @CMHAKelowna and we will retweet our favourites!

Want to see which organizations have benefited from the Bell Let’s Talk Community Fund, click here.