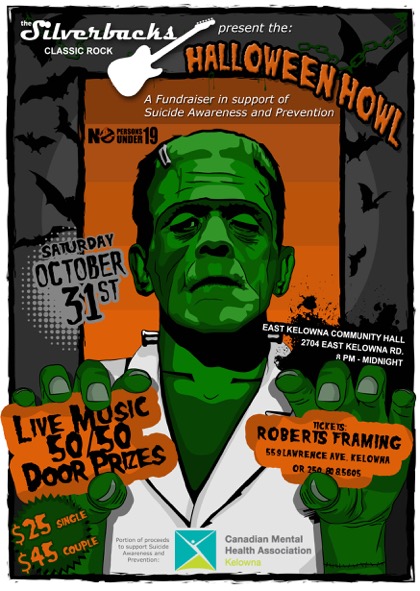 The Silverbacks are holding a fundraiser on Halloween night at the East Kelowna Hall. Funds raised will go back to suicide prevention and awareness programs at the Canadian Mental Health Association’s Kelowna branch. Tickets for the October 31st fundraising dance can be purchased through their Facebook page or at Roberts Custom Framing on Lawrence Avenue in Kelowna.

The Kelowna branch has launched a campaign called Get Loud. Kelowna residents are asked to sign a pledge to speak up and speak loudly for mental health assistance, programs and awareness.

“We’re trying to call the people of our community to get loud,” says Candace Giesbrecht, Director of Community Engagement and Fundraising. “The pledge just basically says if I’m struggling, I’ll talk to somebody, if I see somebody struggling I’ll talk to them.”

Read the full story or watch the video on Global News: http://globalnews.ca/news/2260619/kelowna-band-to-get-loud-for-suicide-awareness/

What are your top concerns for your children? Do you agree with the parents in this study?